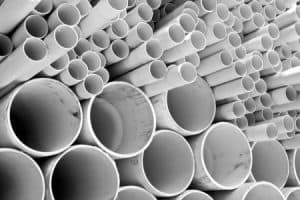 Let’s take a walk down PVC memory lane, shall we? While many people may not realize just how long the synthetic plastic has been around, there is actually a host of evidence that shows PVC (polyvinyl chloride) was first created at least a century ago.

The story peculiarly begins in two separate years—1838 and 1872—when French physicist Henri Victor Regnault and German chemist Eugen Baumann respectively discovered PVC for the first (and second) time. Neither followed up on the breakthrough, but on both occasions the polymer materialized as a “white solid” within flasks filled with vinyl chloride gas.

Following these independent discoveries, no one actually mastered the use of PVC in commercial applications until 1913, when a German inventor by the name of Friedrich Heinrich August Klatte decided to take out the first patent on the material. His polymerization method of vinyl chloride utilized sunlight, and over the next few decades companies around the world began experimenting where Klatte’s patent seemed to leave off.

Around the early 20th century, B.F. Goodrich hired industrial scientist Waldo Semon to develop a novel, synthetic alternative for the increasingly expensive natural rubber. Polyvinyl chloride experiments were started, but the project was soon threatened by the recession of 1920. That’s when Semon had an incredible idea: using PVC as a water-resistant coating for fabrics. Soon enough, sales of the material rapidly took off, with demand peaking at the start of World War II, when PVC was adopted as an insulator for wiring on military ships.

The rest, as they say, is history.

By the 1950s, PVC production was soaring around the world. Five companies in particular started testing out revolutionary uses for ‘vinyl’ PVC, finding new applications for the material in inflatable structures and fabric coatings. The construction industry soon welcomed the durable plastic, in large part due to its resistance to light, chemicals and corrosion, which made it a prime commodity for building structures.

Further improvements were made to PVC’s temperature resistance in the 1980s. It’s around this same time that thousands of American homes began incorporating the material into plumbing systems, and no sooner did twenty global companies start producing the versatile product we’ve come to love today. From healthcare to IT, transport, textiles and construction, PVC has proven itself to be a low-cost, excellent commodity in a variety of industries, as well as our everyday lives.